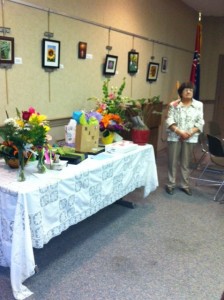 Today, in fact, co-workers will host a reception from 2 to 4 p.m. to celebrate her 25th anniversary on the job.

A quarter-century in one post is noteworthy but far from miraculous – except for the obstacles the New Albany native surmounted to reach that mark.

Perry was born in 1948 with a condition in which protective layers around her brain and spinal cord did not close. She was sped to St. Francis Hospital in Memphis and underwent emergency surgery.

“It is no less than a miracle that Rita is even alive,” said Sandi Morris, Perry’s older sister by 18 months. Few children survived birth with the condition, and fewer still survived the required operation. Of those who did, little was expected.

“She could have been a vegetable,” Morris said.

Their parents – Wilburn and Vera Perry, farmers from Ingomar – were determined she would not suffer from a lack of trying. For years they took their daughter to weekly therapy sessions and medical appointments in Oxford, Tupelo and Memphis.

Morris recalls students would make fun of her sister’s inexact pronunciation and the unusual gait her leg braces imposed. Perry, however, brushes aside the hard parts.

“Sometimes they wanted me to pronounce things right,” Perry said. “But really, I couldn’t see any difference in me and them.”

After high school, Perry went to work and later enrolled at Northeast Mississippi Junior College, but a bout of Bell’s Palsy – a quick-onset disorder that paralyzed half her face – ended her studies there. After sitting out awhile after surgery to repair the paralysis, Perry enrolled at Blue Mountain College, completing a degree in elementary education.

“After she graduated she told me, ‘I was not going to be the only person in this family without a degree,’” Morris recalled. “She was determined to get her degree and be one of the gang.”

Perry decided not to teach full time, but she’s applied her education at the library. One success story was with her boss’ nephew.

“He was dyslexic, and Rita would work with him in the afternoons,” said Sarah Pannell, who was head librarian when she hired Perry. “She was just so good … and was able to use some of her training to help him.”

The library wouldn’t be the same without her.

“When the rest of us give up on finding a volume, we’ll ask Rita,” said Kay Sappington, the current head librarian. “She nearly always knows where something can be found.”

Library patron Martha Lamar said, “I’ve been in and out of the library forever, but we have not had a better servant to Union County than Rita Perry. Courteous, nice, sweet – she’s all those things.”

Besides her work, Perry’s faith is a hallmark. Morris once admitted being unsure how to pray about a particular problem when Perry explained a lesson from a life seemingly filled with divine interventions.

Morris recalled, “She told me, ‘Sandi, you just tell God, “Help!” – He already knows what you need.’”